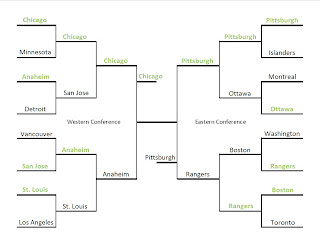 The 2013 edition of the playoff bracket. Winners in green.

Posted by Peter Giesbrecht at 10:56 AM 6 comments:

Blue Jays Give Up on Lind, Add Wells

.
The Toronto Blue Jays could have acquired a right handed bat this winter to platoon with lefty DH Adam Lind. Instead, they opted to fill every other conceivable need with headline deals and crafty free agent signings, giving Lind a chance to show he can return to his 2009 form.

That year he had career highs in virtually every hitting statistic, batting .305 with 35 home runs. At 27 years old, he had become one of the most feared young sluggers in baseball. Of course, those watermarks have not been approached since. Call it a three-year slump or a return to his true unimpressive form, the Blue Jays have been disappointed with the production they are getting from a man they pay $5 million a year.

The Blue Jays coaching staff, try as they may, have not been able to rediscover his old swing. In the last year of a three-year pact, the Jays hoped Lind would find his form, and show he could hit left handed pitchers well enough to maintain a starting role with the club.

One week into the season, he has yet to show he can hit any type of pitcher. He is a miserable 2-for-17; all but two of those at bats have been against right handers. He has been benched twice already through Toronto’s first seven games. In his five starts and three pinch-hit appearances, he has managed one single and one double.

His early struggles are evidently enough to lose all confidence from the front office. GM Alex Anthopoulos claimed Casper Wells of waivers from the Seattle Mariners on Wednesday. The outfielder figures to be the long-awaited platoon righty to pair with the left-handed Lind.

Wells owns a dramatic righty-lefty split, his career OPS against left-handed pitchers is .838, while that number plunges to .675 against lefties. He was started at all three outfield positions last year in Seattle, that versatility makes him an attractive fourth or fifth outfielder alongside Rajai Davis on the bench.

But Casper Wells, main purpose will likely be to shield Adam Lind from the despair of lefty-on-lefty at bats. If manager John Gibbons can maintain favourable matchups all season, the Blue Jays would, between Wells and Lind, effectively have a DH with an OBP of .340 who slugs around .490. Not a bad looking five-spot hitter.

It is not the way Anthopolous had hoped Lind's troubles at the plate would be dealt with, but judging by his swift action to find a platoon partner, it may be the resolution he expected. Lind is not likely to find his 2009 form this year, he may never play that well again. Clearly nobody wants to pick up his $5 million tab; he went through waivers last year and went unclaimed.

So the Blue Jays will be forced to make use of Lind until he becomes a free agent this winter. And to be sure, Adam Lind can certainly be made useful if John Gibbons plays his hand right. Sure, Rogers is paying a lot of money for a guy who has to splip playing time, but as long as Toronto is stuck with that contract, they have an opportunity to extract as much production as they can squeeze out of his talent.

After this campaign is over, barring a miraculous revival in Lind's career, the Blue Jays will finally rid themselves of his burden on the payroll. Whether that relief comes as significantly cheaper extension for Lind, or as Anthopoulos letting him walk, Toronto will be free to use those funds to find a bigger middle-of-the-order bat if they so choose.

In the mean time, Adam Lind and Casper Wells can team up to provide added protection behind clean-up man Edwin Encarnacion. Sure, Toronto expected, or maybe wished, Lind would be able to fill the role on his own, but he is what he is. The Blue Jays have tried to will him into rediscovering the magic of 2009, it is simply not in the cards.

The only way to keep him contibuting positively is to transform him into a platoon hitter. The acquisition of Casper Wells shows he Blue Jays management is ready to take that step. The mission is no longer to revive Adam Lind, but to recast him.
Posted by Peter Giesbrecht at 5:01 PM No comments: